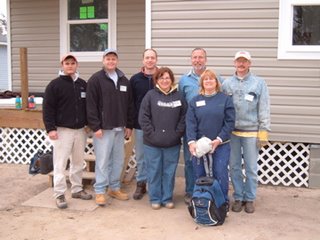 KatrinaGrace Team X (aka Habitat II) left for New Orleans on Sunday 3 December 2006 and returned to us on Saturday 9 December. Blair and Ann Nordvedt write:

"Here are a few pictures of our trip to Louisiana. We had a truly great week. It was unusually cold for Louisiana, in the 30's at night and some days only in the 50's top. We did not take enough warm clothing for the mornings. We stayed in Covington, LA at Trinity Church, sleeping on the floor and they fed us. We drove about 30 minutes to Slidell and worked with Habitat each day. The stores and roads and infrastructure are basically fine after one year from Katrina but there are thousands and thousands of homes that are untouched. FEMA trailers are everywhere in front yards until the homes can be rebuilt. We learned much about the storm and what God is doing. Clearly the storm and faith based relief has had a great impact on many many hearts. We mostly worked on a house for a lady named Ruby and her family. We hope her home will be ready for her by Christmas. Two of the other homes that Ann helped finish will be dedicated and turned over to the homeowners next week. Habitat has a commitment to build 100 homes in Slidell in one year starting last July. Slidell took the eye of the storm and was mostly under water afterwards" (links added)